Home » Sex and relationships » Robespierre is determined to seduce a Shtirlitz
Post Views: 130

Robespierre is determined to seduce a Shtirlitz03.02.2012 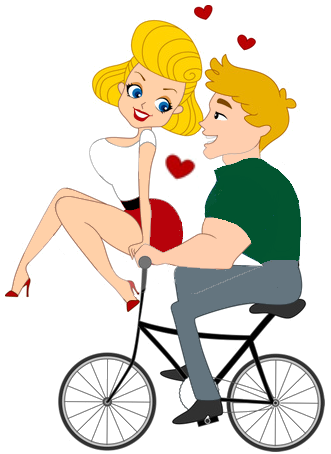 A man has been working in England for a few years. His sociotype is Robespierre. In Latvia he has had two unsuccessful marriages – the first one with a Napoleone type of women and the second one with a Gabin, whom he has not divorced yet. Big fights in family made him learn socionics. Thanks to the newly gained knowledge, he writes letters to us to exchange experience. I decided to publish the first letter where he invites the rest for a discussion.

… I came to the conclusion that I don’t want to go home as much as I used to. As it turns out, here, in England, I feel loved. The job is hard, but in these working conditions I can feel that my colleagues love me more than my own wife. I decided to deliberately look for a girlfriend Shtirlitz. A sudden coincidence made it happen.

One day I was going home on a bike when I recognized a lady who was also going home from work just like me. Her bicycle was creaking and clattering so bad, I could not stand it and came up to her and pointed out all the defects. The lady told me to better go and wash my bike. It took me this one sentence to understand – here is Shtirlitz!

I was still encouraged to continue a conversation with her. Knowing socionics, I was not afraid to tell her about her habits, about what she likes and dislikes. I impressed her with my knowledge of socionics and offered her to fix the bike. The Shtirlitz agreed. I fixed the bike and we got to know each other a bit better. My principle – accept me for who I am. Knowing that the trust of a Shtirlitz can be gained through honesty and not lies, I told her everything about myself, about my bad luck with wives, about everything. I did that so she wouldn’t think that I am trying to become an admirer (nevertheless, that was my actual aim) or that I only want sex. We became friends.

Then collapsed the trap I had set. Already during the third time we met, I understood that I have fallen in love from the bottom of my heart. I had predicted everything about the Shtirlitz, but I had forgotten about myself. The fourth time we met was again going home from work. She had some trouble there and she had caught a cold as well. In the field of food production, which is where she worked, it is unacceptable. I felt really bad about that. I usually carry an unguent for a cold with me. I gave that to her on the spot. While she was at home changing, I went to a shop to buy her sea salt for rinsing her nose. She admitted that no one ever in her life had taken care of her health that way. I did it from the bottom of my heart, because I had feelings for her. As a Shtirlitz, a very careful and smart woman, she began to notice my intentions. Apparently I had made a mistake letting her know how I feel about her.

The further events took their course quite fast. Shtirlitz started to overthink everything, took breaks from seeing me and avoided meetings. She was not in awe with me yet, but I seemed an interesting man to her. I felt she had been counting my strengths and weaknesses. In my opinion, I have many strengths, for I am tidy, accurate, honest, unobtrusive, calm, careful, gentle, interesting, can cook, smart, without any bad habits, live a healthy lifestyle. As for my background, I’m married, father of eight children, nine years older than her (me 50, she 41).

There followed a long time of reflections. We knew each other only for two weeks. Shtirlitz-woman had to go to Latvia on business. She also wanted to discuss our relationship with her 17 year old son. She returned form Latvia a week later and was very tired. She said there had been a lot of business to attend to and her friend`s mother had died as well. On the exact day the Shtirlitz returned we celebrated my 50th birthday. After picking her up at the bus station I walked her home. I took some snacks and a piece of cake I had made myself with me. To her surprise I can make fantastic cakes as well! We sat, enjoyed the meal and drinks, then she couldn’t wait any longer and pulled me into bed. However, I was stroke by my faith. I have only slept with three woman I my life and I knew I had to get used to a women`s body and actions in bed. I was really nervous and the sex didn’t turn out so well. The next day was even worse. The failures of the first days had completely set me off the track. And the next events were more terrible since my psyche had kicked in. A complete failure! And she wasn’t able to calm me…

The intrigue will be presented in the next letter.